This course is an introduction to planning, monitoring and evaluation of projects or other work. It explores what impact is, methods of assessing impact, and practical tips throughout. It is comprised of recorded talks, worksheets and further reading and has been kindly sponsored by The Horse Trust. 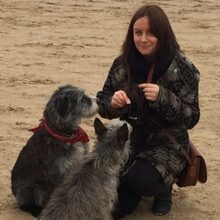 Anna is a community & education intervention monitoring & evaluation specialist. She is currently the Monitoring, Evaluation & Learning (MEL) Manager for Manchester City Football Club foundation; City In The Community. Previous to this she was the Education M&E lead at Dogs Trust, where she worked for six years. She has lead on transformative overhauls of the implementation of strategic MEL processes for both organisations by developing Theories of Change, outcome frameworks and multiple large scale quantitative and qualitative impact evaluations with evaluation work published in academic journal PLOS-One.

She holds a Masters degree from UCL in Educational Planning, Economics and International Development with a research specialty in Theory of Change and impact evaluation. She has supported and consulted to multiple animal welfare education programmes in low and middle income countries.

Anna is passionate about the need for organisations to recognise education & community intervention as complex; requiring of and interdependent on the same level of strategic planning as more practical and immediate charity strategy. And has a vocation to drive the pressing need for structured MEL to be embedded as an intrinsic cog in the machine of all behaviour change seeking organisations.

She lives in Manchester with her partner and son, has a scruffy dog called Mo, and has a special place in her heart for Indian street dogs. 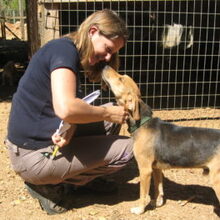 I have worked in several very different roles that together have paved the way for being the co-director of HBCA alongside Jo. I have a long-held interest in the behaviour of animals, including the human animal, which has been a thread through my varied roles, developing interests and professional focus. After graduation, for 10 years I worked in science publishing – initially as a science journalist, then as the managing Editor of Trends in Biotechnology, and later managing several journals. On reflection, this role started my interest in human behaviour change as I received training on conflict management, counselling and communication techniques. In my spare time, I re-qualified in animal behaviour and welfare and gained extensive practical experience with several international organisations. In 2006, I founded Learning About Animals, through which I organised educational events, undertook animal welfare consultancy projects and worked as an equine behaviourist. I am still an IAABC-certified horse behaviour consultant and lecture for the University of Edinburgh on their Clinical Animal Behaviour course. Through extensive travel to low-income countries, I gained interest in transport animals and in 2005 joined the Board of the World Association for Transport Animal Welfare and Studies (TAWS). I am one of the co-founders of Change For Animals Foundation (CFAF) and Trustee of the World Cetacean Alliance (WCA). During this period, I completed several post-graduate certificates and courses on a huge range of topics, including a certificate in participatory research from the University of Delhi. In 2007, I joined WSPA (now World Animal Protection) as the Programmes Manager of the Companion Animal Unit managing several dog population and working equine programmes. The role was to develop and test participatory approaches – working with communities to change the way they manage and care for their animals. I led the move away from a heavy focus on mobile clinics towards prevention through participatory approaches and applying the science of human behaviour change. To reflect the broad applicability of the approach to many issues I later gained the job title ‘Technical Advisor for Human Behaviour Change Programmes’ and provided input into issues ranging from alternative livelihoods for dancing bear Kalandars in India, to slaughterhouse workers in Europe. Between 2011 and 2016, I worked as an international consultant for animal welfare and human behaviour change and in that period Jo and I gravitated towards each other as we shared the same unwaning enthusiasm for all things ‘human behaviour change’. In 2016, I co-founded Human Behaviour Change for Animals CIC with Jo and the rest is history! 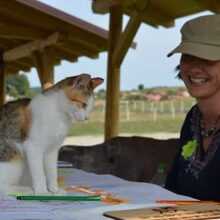 Human behaviour change is at the heart of all the work Jo undertakes in animal welfare. As co-founder of the social enterprise Human Behaviour Change for Animals alongside Suzanne, she is committed to making a difference. A life-long passion for animals has resulted in a career that spans nearly three decades working with and connected to animals. From its practical beginnings with horses who remain a constant, to developing and implementing international projects to deliver behaviour change to improve animal welfare, including the human animal.

Jo’s interest in behaviour led to an increasing focus on the role of the human animal in sustainably improving the wellbeing of animals. Using the principles and theories of human behaviour change within her work, including research, education, training, campaigning, communications, advocacy, project design, and strategy development. She has worked to deliver positive change through building capability, creating opportunity and developing motivation among the people and communities involved with animals.

Jo has an MSc in (Human) Behaviour Change, a Degree in Equine studies, a Certificate in Campaigns, together with varying practical equine qualifications. During her Master’s Degree Jo undertook research exploring the potential for human habit formation and change to deliver sustainable improvements for animal welfare; this research is now ongoing.

In 2001 she became Campaigns Manager for the then International League for the Protection of Horses, which went on to become World Horse Welfare. During her ten years at the charity she was promoted to the Senior Management Team as Director of Campaigns and Communications.

Jo developed and led a number of international welfare projects seeking improvements, through influencing and supporting change. Examples included the campaign to end the long-distance transport of horses and donkeys for slaughter. This work successfully delivered changes to legislation that improved welfare – including a reduction from over 160,000 to around 26,000 horses and donkeys being transported each year. In 2010 she was awarded the British Equine Veterinary Association Welfare Award, for her work on this campaign. Examples of others areas of focus include UK and EU animal welfare policy and legislation, work on equine disease and movement, capacity building in Romania, and the change process associated with rebranding World Horse Welfare.

Jo’s ambition of running her own company became a reality in 2011 when she set-up the social enterprise Progressive Ideas. She has since worked with a variety of UK and international NGOs, universities, policy makers, commercial organisations and individuals, covering a myriad of different animal welfare projects where understanding human behaviour and behaviour change is central.

Thank you for a very informative course. It is a great introduction and I now have lots of ideas which I hope to put into practice at work. Feeling inspired ...

Thank you for a very informative course. It is a great introduction and I now have lots of ideas which I hope to put into practice at work. Feeling inspired to learn more about this topic, and have a go at some of the methods. I would recommend!